In the second half of last year, FanRuan held a four-month plug-in development contest with a total prize pool of 300,000. It attracted more than 2,000 participants from all over the country to sign up, and a large number of very beautiful plug-ins emerged.After testing, it will also be launched on the FanRuan market (application center), which can be widely used in the report product FineReport!
Today I will show you some beautiful plugins:

Function：Stereo Earth is a very good cross-regional geographic information-based data carrier. Compared to the flat map, the 3D Earth is more vivid and expressive. The 3D Earth plug-in supports point annotation based on quantity and position and flow direction map with two positions and time dimensions. It realizes 3D display and spatial information management in the Web environment, and also publish information, share data and communicate based on the report platform. And based entirely on the B/S mode, it seamlessly interfaces with the decision-making large screen.

Function：The 3D panoramic map plugin brings time and space to FanRuan. In terms of time, the plug-in supports the use of date as a dimension, dynamically rendering the trajectory of the point on the map, and supports multiple trajectory classifications;

From a spatial perspective, the plug-in makes the urban building out of the plane ,three-dimensional, and provides the mouse Interaction. Not only that, but the customized plug-in also supports real-time refreshing of data, displaying multiple markers on the map, dragging the map with the left button, and holding the right mouse button to move the view.

Appliction:Government departments, chain companies, LBS providers and other users who are sensitive to real latitude and longitude and display area

Function：The Trajectory Map plugin supports various configurations of latitude and longitude point data animation, including the speed, color, smearing, order, etc. of the motion trajectory. After the Finereport user configures the track map plug-in, it can simultaneously manage and track the trajectories of tens of millions of terminal devices in the report or large screen.

Function：The ring diagram, the essence of which is the pie chart to hollow out the middle area. The overallity of the pie chart is too strong, and we will focus on comparing the relationship between the individual sectors in the pie chart. But if we put two pie charts together, it is difficult for the pie chart to compare the two images at the same time. When solving the above problems, we have adopted the practice of letting us pay more attention to length rather than area.

This way we can compare different ring diagrams relatively simply. At the same time, the ring map is more efficient than the pie space. For example, we can use its hollow area to display text information, such as the title.

Application：This plug-in adds the functions of the automatic play series required for large screens based on the integration of the domestic well-known open source chart library ring map, and provides a variety of switching animation schemes.

Sankey diagram: a visual analysis tool for data such as energy, material composition, and finance Function：The  Sankey diagram consists of traffic, nodes, and edges, and is suitable for node datasets (optional) and edge data sets. Data weights are mapped to the width of nodes and edges. Sangiti needs to maintain energy conservation, not creating flow in the middle process, and the lost (loss) flow should flow to the node representing the loss.

Application：It is commonly used for visual analysis of data such as energy, material composition, and finance.

Function：The use of images in decision-making reports requires the help of plug-ins. The normal image control designer plug-in can only display a single image, which can not meet the user’s display needs.

Application：Suitable for all kinds of scenes that need to be rotated for multiple images. Function：In general business reports, the use of column charts is very extensive and is the most common type of chart, but monotonous column charts do not vividly express data in all scenarios. The pictogram column diagram is an extension of the column chart. It can express the data by the length and width of the figure, or the number of the figure, even the color of the figure, the change of the transparency, and the meaning of the data.

In addition, pictograms can also represent values using the same number of graphs, achieving effects similar to those in the figure below. Therefore, the pictogram column can largely satisfy the drawing requirements of the information map.

Application：Suitable for most column charts Function：Many of the production users of the soft report are database-related operation and maintenance personnel. It is very troublesome to use js to obtain weather information at the front end. So in this visual plug-in contest, developers have also innovatively launched a “weather visualization” plugin.

The weather control supports three built-in styles, which can be contacted with the soft technical support or sales to get more form customization, support the location based on ip, or specify the city that displays the weather. Supports the configuration of double background color and temperature, text styles that describe the typeface, and supports the display of right angles and rounded corners.

Function：Not only the stereoscopic column, but a new dimension, you can put more data in the same space of the same chart, and add a lot of property settings, can display gorgeous display effects, and can automatically rotate Let users intuitively feel the effect of the data. If there is no correlation between the variables, then the scattered points will appear as discrete points on the scatter plot. If there is some correlation, most of the data points will be relatively dense and present in a certain trend. For those variables that have a close relationship, but these relationships are not as accurately expressed as mathematical and physical formulas, scatter plots are a good graphical tool. Data collision graph: Have you seen data that will fight? Function：Supports the contrast between two values, showing two data in the form of a percentage, and when its specific value changes, it can produce a unique zoom-in and fade-out animation effect, which vividly attracts the user’s attention. The traditional bar chart data display is a static chart.

3D card animation: a dynamic visual feast that can turn around

Function：In the large-screen display, there is no good solution to the processing of dense images, such as the desire to display multiple product lines or different marketing cases. In the project requirements, I hope to deepen the intensive pictures, stereoscopically present and bring more cool animations or switching effects. The 3D card animation plug-in is a plug-in for the developers who are the closest to the soft native graphics experience. First, its coolness is beyond the limits of the traditional FanRuan  chart.

Since you can customize the path of the image and the location where it is displayed, you can even make a periodic table of elements, which of course can be the logo of the company or the image of an important product. Bullet map: a bullet map that is more effective than the dashboard

Function：The bullet map looks like a track that is taken out after the bullet is fired, so it is called a bullet map. The bullet map was invented to replace the odometers commonly used on dashboards, and speedometers and the like based on circular information representation. Function：In the daily management process, enterprises will generate a continuous specification of a large number of behavior patterns. This scenario is usually described by a flow chart. Common flowcharts are classified by describing different objects, including: business process diagram, page flow chart, function flow chart, data flow chart, and so on.

The use of flow charts can help business managers sort out product development, personnel and financial processes, and effectively reduce communication costs between team members. It helps to improve and optimize the product demand plan and evaluate the company’s business leads.

Application：It is applicable to the daily management of most enterprises

Function: The water polo map is a type of chart suitable for presenting a single percentage of data. Through a simple and clear data interface and feature-rich style configuration items, users can quickly generate cool water polo maps instead of traditional dashboards and other graphs showing percentage data. You can also use it to display various levels of progress.

Application: The water polo map can more accurately display the percentage data and the continuous relationship between the percentages. Function：The traditional decision report block is static, the list does not scroll, the data must be displayed at one time, the effect is not cool enough in the large screen, and the latest data cannot be automatically obtained.

This plug-in supports the presentation of reports in the form of graphs. By setting the dataset, it displays a list of similar report blocks, supports user zero code to obtain database information and configures automatic update time, supports configuration of headers by field names, supports custom color configuration, etc. A variety of configuration items to help users make cool decision reports and even large screens.

Mini Figure: Remember the minimap in the Excel cell? FineReport also supports it!

Function：The mini map supports three forms, namely a bar chart (supporting a profit and loss chart with negative numbers), a line chart, and an area chart. And support users to set the axis, uniform color, adjust the background, directly preview the final effect in the panel. So although the user’s report looks just as flat as the traditional report in the main interface of the designer, it becomes very vivid after the preview.

Function:Bar charts and pie charts are very common chart types. The former is often used to show the size comparison of data. The latter is good at describing the relationship between parts and the whole. When a bar chart displays multiple series of multi-category data, it tends to be complicated and difficult to understand. The relationship between the bars is not clear, and the pie chart can make up for the disadvantages.

In addition, when making decision reports or  large screens, the use of this plug-in is not only cool, but also supports automatic playback, smooth animation playback, and easy unattended display. 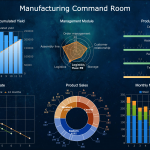 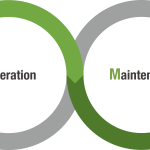 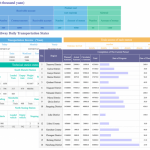